19 years ago today George entered our lives. How quickly those years passed. Here’s hoping that you will have a wonderful birthday there today, and you are able to enjoy it with your friends. We’re looking forward to seeing you this weekend. 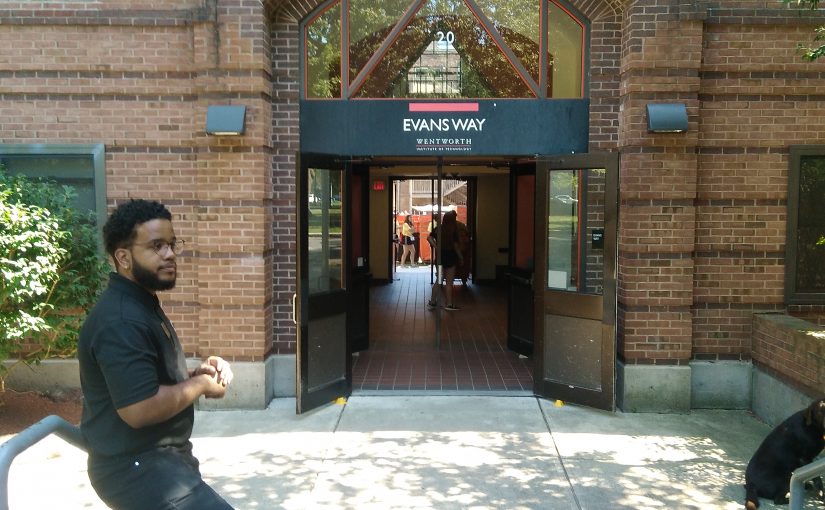 We took George down to Wentworth today for freshman check-in and move-in. Below are a few photographs we took about the day, about the area where George will be living for the next year, and about his room in general.

It seems George’s friend “estankie27” didn’t quite have the Valentine’s Day he was hoping for. Yes, son, there’s even a card for that… Last Saturday evening was Tyngsboro’s annual ‘Shamrock Ball’, also known as the Father-Daughter Dance. This yearly event, hosted by the Tyngsboro recreation department, gives the younger (mostly elementary school) girls a chance to dress up, including their first ‘high heels’  and be taken out to a dance. As soon as the couples arrived, the girls immediately split off into groups of friends, where they compared who had the biggest heels, nicest dress, nicest hair, and other important details. After settling all the details on who was wearing what and how much work they had to do to prepare for the ‘dance’, the girls were ready to ‘cut loose’. So did our little princesses dance with their daddies in the cafeteria? Nooo… Did our little princesses shriek with laughter after making their dads get on stage and lip-sync the Village People’s “YMCA”? Nooo… Jennifer and Lauren cut out to across the hall in the gymnasium and attacked the climbing wall, while many of other girls ran up and down the court and played basketball while their fathers stood around with pretty pink purses and looked perplexed. Afterwards, they got to play dress-up (even more!) for the photo-booth. A fun evening was had by all.

George and I ran our second 5k race today. Weather was a bit on the cold side, but still not too bad for the first weekend in February. Besides running to have fun, George was also running as part of his Boy Scout fitness requirement. George was a bit nervous at the start, as he had to show an improvement over his last 5k time back on January 1st.  I knew he was going to do fine, as we had been practicing together around the neighborhood and on the basement treadmill since the Lowell 1st Run. (The little boo-boo on his lower left lip is where we learned not to try taking a sweatshirt off over our head while running on the treadmill.) George did great, taking over five minutes off his previous 5k time (36:57 to 31:28), and afterwards enjoying refreshments, several bowls of pasta, cookies, Although a cold and windy day, George and I ran our first road race together yesterday. The Lowell 1st Run is a nice 5k New Year’s Day race just up the road in Lowell. George did great, considering the weather, crossing the finish line and picking up his ‘space blanket’, his finisher’s medal, and several bowls of pasta. Jennifer did her first, and Georgie his second, triathlon today. The weather was less than ideal, especially for a mid-June. Today was the fourth day of cold and rainy weather in the Boston area. We got up and left the house a little after 6AM after it had been raining hard on and off all night. Driving down to Lincoln, we remarked that the sky seemed to be brightening, but that was only temporary. Another line of heavy rain started, and got heavier as we pulled into the race site at school grounds in Lincoln. We sat in the van, hoping the rain was slow down, but it only grew harder as the lightning and thunder broke around us. After sitting there for almost 20 minutes, the rain slacked off enough for us to dash in so the kids could get their race packets and numbers. Dashing back to the car, we drove over to the parking area, and sat there for another 20 minutes until the rain had almost stopped. By this time, it was quarter after eight, with the race start time listed as 8:30. The kids got their bikes and bags over to the transition area, got set up in their assigned spots, and went to get their timing chips. The rain had ended for the race, but the course was soaking wet, cloudy and cold. Jennifer said she froze on the bike, and grabbed her sweatshirt in T2. They both did great, and we’re very proud of them both. Update 26 June: The timing company finally published on-line the results, and everyone is able to see how well George and Jennifer did. Here are their times for the ‘tri:

The boys from the Tyngsboro Webelos I den attended Readyman 2011 yesterday. Readyman covers basic first aid and safety for advanced Cub Scouts, and is an important transition into Boy Scouts. Anay, George, Matthew and Tyler went through a series of workshops covering the Heimlich maneuver, ‘hurry’ first aid, first aid for minor cuts, burns and bites, and the Courage Character Connection. All the boys did excellent, and received a certificate showing they successfully completed the Readyman requirements.