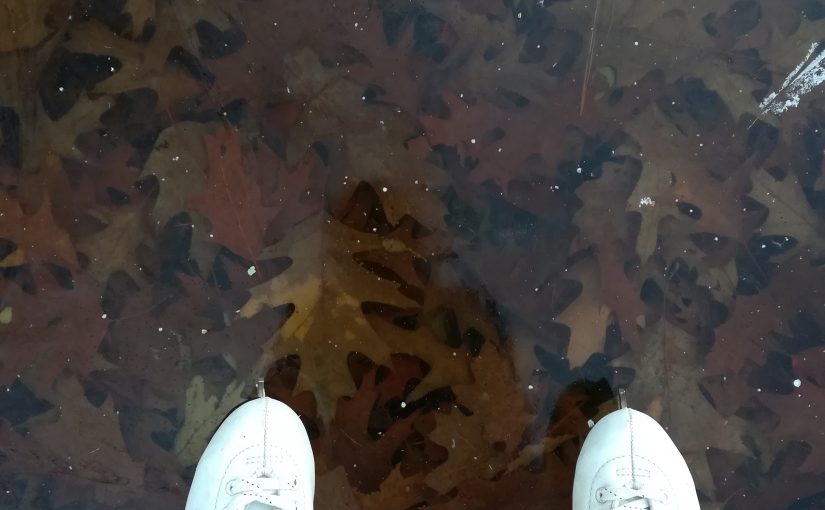 Sunrise: 7:10 AM. Sunset 4:11 PM. Still two weeks to go to the first day of winter. Dark when I leave for work in the morning, dark when I get out of work in the evening. 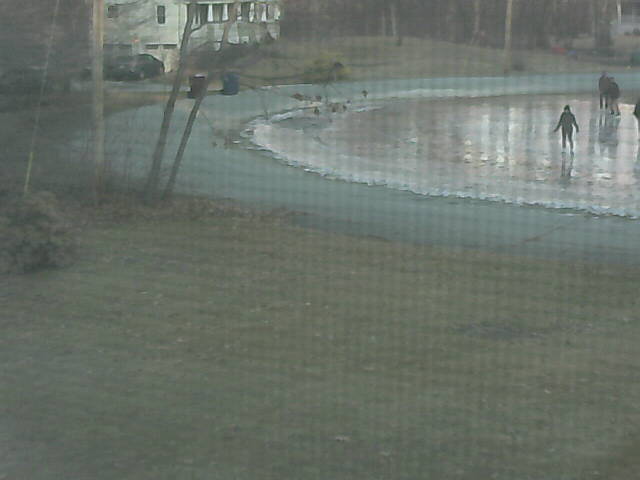 The pond across the street, which has now grown to cover half the street, is frozen solid. Jennifer, George, and two of his friends spent part of yesterday after school ice skating.

With the weather cooling off, dark in the morning, and soon dark in the evening, it was time to brush off the treadmill for wintertime basement running. Stepping onto the belt and turning it on, I was greeted with a low hum that sounded like the motor was trying to lower the platform. Problem was, the platform was already at the lowest point. Pushing the ‘up’ rocker switch produced nothing. I flipped the unit on its’ side, and removed the protective covers from the bottom. I found a pleasant surprise on the underside of the covers: Full schematics for the electronics! Wheee! The schematics clearly showed the up/down motor controlled by the ‘lift board’, so I started tracing wires to locate the board. The location of the board again confirmed the nth corollary to Murphy’s Law, in that the probability of a component failing is inversely proportional to its accessibility. After disconnecting the all the lines (and noticing the board was ‘floating’, i.e., no ground line or grounding points), I was able to take a close look at the board. Fortunately, it clearly said ‘Lift Board’. (If it had said Heisenberg compensator I’d have to go back and start pulling other boards.)

After testing the board with my volt-ohm meter, I found one of the triacs (one of the two black boxes with three legs in the top picture) had failed. After getting another one in through Amazon (and a two week wait), I was able to desolder the old one, and solder in the new unit. After getting the new triac soldered in,  replacing the board, and putting everything back together again (with no extra parts left over!), the treadmill is back running smoothly again. This message was created automatically by mail delivery software.  A message that you sent could not be delivered to its recipients.

This is a permanent error. the following address(es) failed:
This message has been rejected due to unavailable of mailbox or its mailbox full up.
See attach file for more information
Please do not reply to this message as it was created automatically by mail delivery software.

I see where representatives of Google, Amazon, Apple,  AT&T,  and others testified before congress today to implement federal legislation to “… protect consumer privacy.”

The only reason companies like the above clamor for federal legislation is to protect their own positions. While they made it clear they believe federal legislation should override state legislation (thus only having to lobby Washington rather than 50 state capitals), the overriding objective for such companies  has always been to inhibit the creation and growth of competition. Guaranteed any new federal rules and laws will do nothing more than to make it more difficult to create and launch new companies, potentially competing against the big ones. Big companies are never taken down by another big company, but by the little startup that figures out how to provide a product or service that negates the established guys position. Inhibiting new companies, new ideas, and new business models, only serves to protect the entrenched interests. 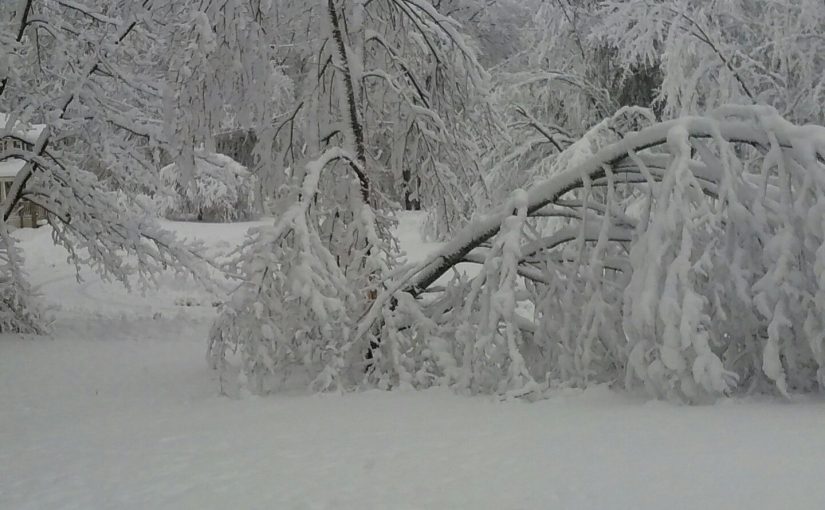 The storm had been hyped for several days, with excited forecasts of heavy snow starting Wednesday late morning to early afternoon, and going on through the night. Come Wednesday afternoon, nothing. Easy drive home, with the snow just starting as I drove up Rt. 3. The snow picked up quickly, with big, fat flakes after I got home.

About 10:30, just as we were getting ready for bed, the lights flickered a couple of times, and a few minutes later, went out for good. I added a couple of gallons of gas and started the generator, then went to bed. As we fell asleep, we could hear loud cracking and crashes in the woods next to us. The next morning, we were knocked out of our beds by a crash that shook the house, and awoke to find this outside.

The top of one tree took out our power lines to the pole, and another just missed our back porch. The news reported Tyngsboro was 92% without power, and many other towns nearby were completely dark. Reports said many roads were blocked by downed trees, poles, and lines, and to stay off the roads unless necessary. Later that afternoon, Jennifer and I ventured out for more gasoline, and she took these pictures along Frost road.

The power was restored to our neighborhood around eight that evening, except to our house. Power crews were not able to address individual homes until all the large areas and critical operations were restored, so we didn’t see any activity until Sunday morning. First a tree crew arrived to clean the downed limbs from the lines, then the line crew arrived to reattach the lines from the house to the pole.

Just getting back to normal, just in time to start another school and work week. Forecasts are now calling for another ‘noreaster for Tuesday, here’s hoping it will pass us by.

Although I had been threatening to get the new server up since August, the confirmed death of HAL and fall storms convinced me it’s time to get the new platform running.

Our backup server, based on an old Dell I acquired from Freecycle, was also showing the effects of age and the dreaded Dell capacitor rot. After yanking out the failing capacitors, we had to use a small desk fan to keep the insides from overheating and shutting down.

Late last week, I finally got the last bits in, FreeBSD installed with Apache, PHP, and MySQL. One function I’ve been wanting is both a backup solution, and access to a ‘cloud server’ I could trust. (Based on their terms and conditions, I don’t trust Google Drive, Microsoft OneDrive, Apple iCloud, or any of the other ‘free’ services.)

The system is working fine, as you’re reading now from our new server. Still working on adding the ‘apps’ to the cell phone to access our own cloud, but they are mostly working fine as well.

If you’ve been trying to see what we’ve been up to these past few days, you probably got a timeout or web page inaccessible message the past few days.

We lost power in the storm Sunday night / Monday morning, around 2:40 AM. A lot of people in the Merrimack Valley lost power that evening, as we had a storm come through with hard rain and strong winds. There were a few places in the area that clocked gusts in excess of 90 MPH. Lots of trees and branches down. We had a tree come down on Robin Hood, just around the corner from us, pulling down electrical wires and blocking the road. Our generator had been running full time since early Monday morning, so keeping the website up has not been a priority here.

We hosted Anne and Mike last night, as they lost power too, but didn’t have a generator. Joyce skipped major cooking and brought home Market Basket roasted chicken and salad, and made mashed potatoes on the stove.

I got a call from George about 12:30 this afternoon (school was canceled because the buses couldn’t run their regular routes) saying our power was back on. I talked him through the process of switching back to line power, and shutting the generator down. Still lots of people in the area without power, hope they all get power back soon. 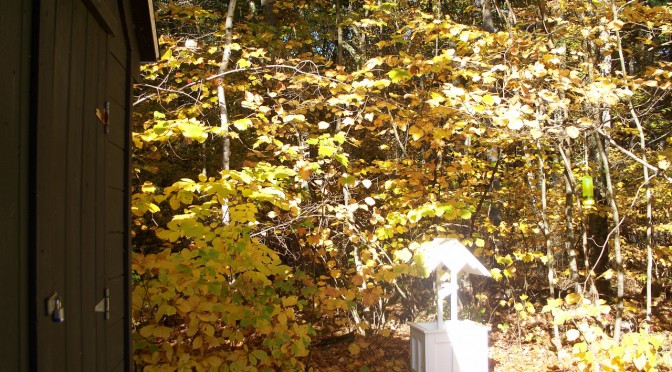 Bundled under a blanket on the couch last night, Joyce gently suggested that perhaps it might be time to turn the heat back on. Summer is gone, leaves are turning, frost sparkles on the morning grass. We finally turned the heat back on last night. Woke this morning to a comfortable house, with the warm smell of the heaters working. Fall is here. 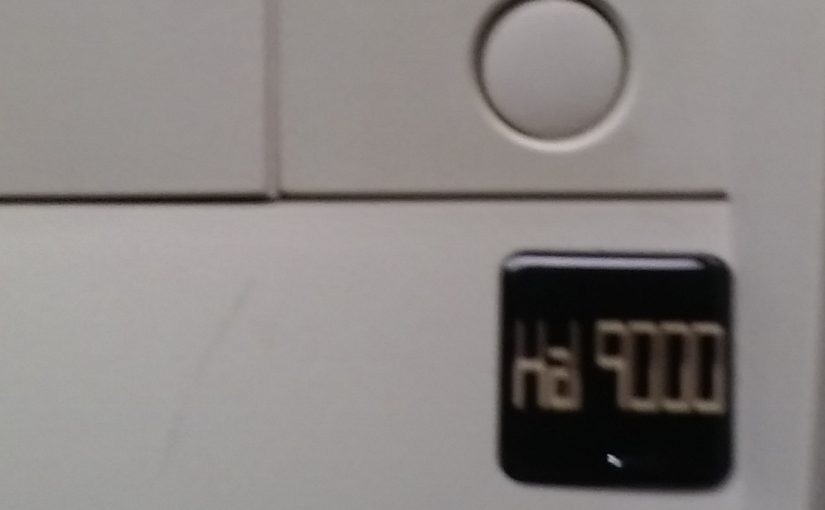 As you saw on my last post, our original family website server died. It served us well for many years, stretching back to just before Joyce and I were married. This was the system I started my own business on, and launched another business, before joining my current laboratory.

Hal then was repurposed as the kids’ original computer (with a new power supply and motherboard), and lived again for several years until the kids outgrew the platform. He was again repurposed, dumping windows for FreeBSD to run the website (and other functions) you are reading now.

Tests on the system showed both the motherboard and power supply had gone bad. I don’t know which one went first, and took the other with it, but all the memory, drives, fans, and USB interfaces could be salvaged. The new server is coming along well, hope to get it done and on-line soon.

Well, that was a bit of a scare. We’re currently running on a backup server, after the kids old ‘HAL-9000‘ we had been running on failed. So of course, the backup server overheated and went down yesterday afternoon. Just got it restored earlier this evening, and got the database and directory structure backed up to my desktop system.

Time to build a new server…